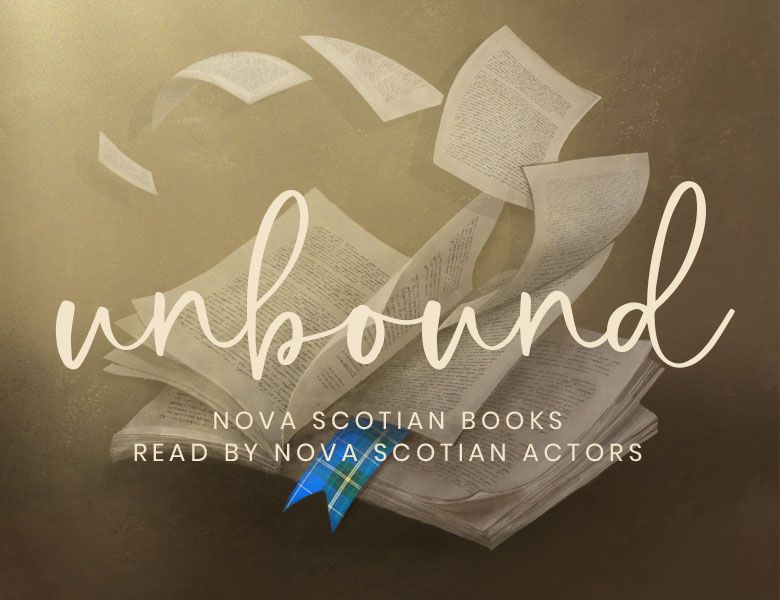 As Neptune continues to develop its streaming service, Neptune at Home, it was a natural progression to use the theatre’s facilities for the creation of audiobooks. Neptune’s artistic director, Jeremy Webb, along with Patricia Cerra, RBC Chrysalis artistic director intern, provided creative direction on the audiobooks.

The Writers’ Federation has selected foundational books in Nova Scotia literature to be produced as audiobooks. In selecting the books to be recorded, WFNS wanted to ensure representation in genre (non-fiction, fiction and poetry) as well as cultural diversity of the authors. For Marilyn Smulders, executive director of WFNS, the project is giving new life to these books and Nova Scotians an opportunity to experience and explore these essential works in a new format.

“As an audiobook listener myself, I’m thrilled that some really great Nova Scotian books—that perhaps people have always meant to read but haven’t—will soon be available to listen to,” stated Smulders, adding, “The narrators are breathing new life into them and allowing us to experience them anew. They’re perfect for car rides, walks in the woods, or tasks where the mind is free when hands are busy. You’ll be transported, I promise.”

Scotch River is a novel of powerful secrets. It tells the story of Cass Hutt, a bull rider living out West, who has nothing left to lose. With nothing and no one to hold him—his rodeo partner has been killed—Cass heads East, lured by the arrival of a mysterious land deed for property in Scotch River, Nova Scotia.

Back in his boyhood hometown, Cass encounters people as eccentric and as lonely as himself. They may even be related to him.

Scotch River’s performer Matthew Lumley is a theatre and film actor based in Halifax.

Ocean written by Sue Goyette and narrated by Leah Pritchard.

The ocean has never had a biographer quite like Sue Goyette. Living in the port city of Halifax, Goyette’s days are bounded by the substantial fact of the North Atlantic, both by its physical presence and by its metaphoric connotations. And like many of life’s overwhelming facts, our awareness of the ocean’s importance and impact waxes and wanes as the ocean sometimes lurks in the background, sometimes imposes itself upon us, yet always, steadily, is. This collection is not your standard “Oh, Ocean!” versifying. Goyette plunges in and swims well outside the buoys to craft a sort of alternate, apocryphal account of our relationship with the ocean. In these linked poems, Goyette’s offbeat cast of archetypes (fog merchants, lifeguards, poets, carpenters, mothers, daughters) pronounce absurd explanations to both common and uncommon occurrences in a tone that is part cautionary tale, part creation myth and part urban legend: how fog was responsible for marriages, and for in-laws; why running, suburbs and chairs were invented; what happens when you smoke the exhaust from a pride of children pretending to be lions. All the while, the anthropomorphized ocean nibbles hungrily at the shoreline of our understanding, refusing to explain its moods and winning every staring contest. “I wrote these poems,” comments Goyette, “because I know very little about the ocean and yet rely on it like a mirror, a compass.” In Ocean, Goyette demonstrates how a spirited, playful and richly mythopoetic engagement with the world can actually strengthen our grasp on its bigger truths. (From Gaspereau Press)

Ocean is the winner of the 2015 Lieutenant Governor of Nova Scotia’s Masterworks Art Award and finalist for the 2014 Griffin Poetry Prize. The French translation of Ocean by Georgette LeBlanc won the 2020 Governor General’s Literary Award for Translation.

Sue Goyette has published a novel and six previous collections of poetry, including Ocean (winner of the 2015 Lieutenant Governor of Nova Scotia Masterworks Arts Award and finalist for the 2014 Griffin Poetry Prize), The Brief Reincarnation of a Girl, and Penelope. She has won the Pat Lowther Memorial Award, the Atlantic Poetry Prize, the CBC Literary Prize for Poetry, the Earle Birney Prize, the ReLit Award, and the Bliss Carman Award. Goyette lives in Halifax, where she teaches creative writing at Dalhousie University. In 2020 she was appointed the city of Halifax’s eighth poet laureate.

Click the titles below to learn about each audiobook.